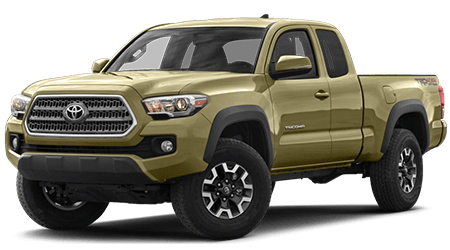 If you're in the market for a rugged and robust mid-size truck that has some class and panache, the all new, refreshed 2016 Toyota Tacoma is your baby. In fact, you'll say "Oh Baby," when you come to Claremont Toyota in Claremont, CA, and see the incredible low price we'll offer you on this handsome heavy hauler. Our friendly sales team would love you to show you everything this truck can do for your business or personal needs, so head out of Pomona, Rancho Cucamonga, and Upland, CA and let's kick up some dust in a 2016 Toyota Tacoma today!

To add to the muscular physique of the beefy 2016 Toyota Tacoma, a taller hood and heavier wheel flairs add exterior sinew, but what really makes the Tacoma explode with power is what's under the hood. Two engines are offered -- a 159 hp, 2.7-liter 4-cylinder engine, or a new 3.5-liter V6 with direct fuel injection and an Atkinson power cycle which aids with fuel efficiency. The V6 engine also adds a new, 6-speed manual transmission, and a new 6-speed automatic is available on either engine. RWD is standard, but you can gain more traction on slick roads or rough terrain with the optional part-time 4x4 system. And the rugged TRD Pro version of the 2016 Toyota Tacoma will really keep you solid on rocky road via its standard Crawl Control and Multi-Terrain Select.

You'll be able to choose from a multitude of configurations on the 2016 Toyota Tacoma based on bed, cab, engine sizes, and model. Featured cabs are a two-door Access Cab or four-door Double Cab with seating up to four. All Tacoma trims include cargo tie-down points, mudguards, a reinforced bed, Bluetooth, and a 6.1-inch touchscreen stereo system. New standard features in the 2016 Tacoma include keyless entry, a 4.2-inch color information display, and projector beam halogen headlights. Off-roading gets serious in the TRD Pro Series which comes with standard four-wheel drive, a TRD-tuned front, and TRD Bilstein high-performance shocks, as well as tech including Smart Key with push-button start and Qi wireless charging.

You might not be looking for attention, but you'll get it when you're behind the wheel of a muscular, durable and beautiful 2016 Toyota Tacoma. Head on over to Claremont Toyota, serving the Inland Empire, and see what all the fuss is about. Before you can say "Oh Baby," you'll be parking a Toyota Tacoma in your garage before nightfall!